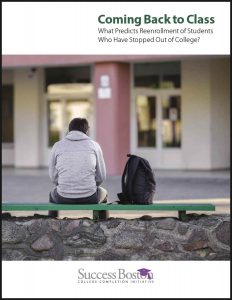 Coming Back to Class

In April, the PIC and its partners released: Coming Back to Class: What Predicts Re-enrollment of Students Who Have Stopped Out of College? The study incorporated a mixed-methods design, utilizing administrative and student survey data, to identify predictors of re-enrollment in college after taking one or more semesters off. The PIC collaborated with the Boston Opportunity Agenda, The Boston Foundation, Bunker Hill Community College (BHCC), and the UMass Boston Center for Survey Research on this research project funded by StriveTogether.

The study’s primary goal was to gain a better understanding of the factors influencing students’ re-enrollment decisions after having stopped out. Colleges can use the findings to conduct their own data analysis on campus and consider programmatic interventions and systemic reforms that will allow more students to return to college after having stopped out. The study cohort was BPS graduates from the classes of 2010 to 2016 who first attended BHCC and UMass Boston and stopped out before completing a credential.

In partnership with NextGen Talent and Burning Glass Technologies and with support from The Boston Foundation, the PIC co-authored the study: Mobilizing for Opportunity: Connecting Low-Income College Students to Internships and Good First Jobs.

The study analyzes how well graduates of local four-year colleges are connecting to internships and good first jobs. Good first jobs for bachelor’s degree recipients are defined as jobs that typically require a bachelor’s degree. The research assesses the existing capacity in Greater Boston to provide students with comprehensive career supports in college and in the transition from college to the workforce. The report provides recommendations on how to improve the early career employment and earnings experiences of local four-year college graduates.